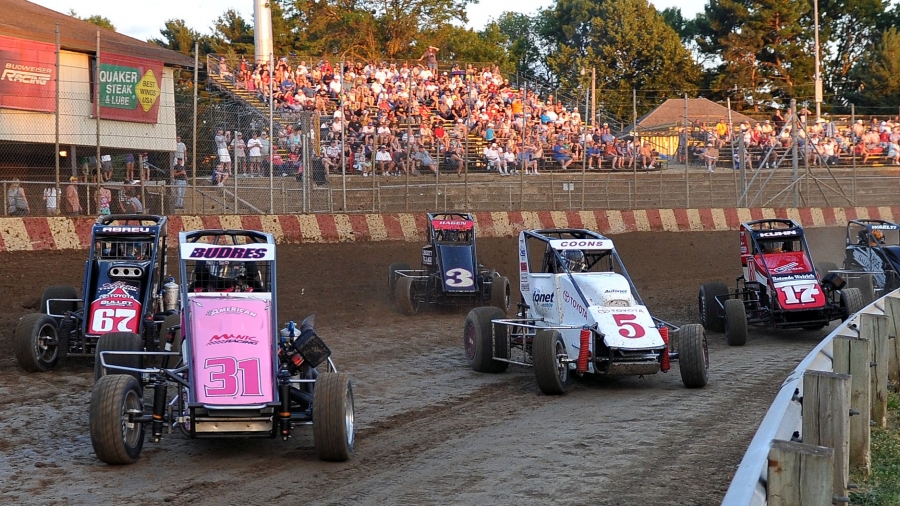 For the 47th time, Angell Park Speedway is back as the host of USAC National Midget racing, and for the first time since 2015, with its marquee event, the Firemen’s Nationals, and this Sunday night, September 5, celebrates its 37th running with $5,000-to-win up for grabs.

USAC has sanctioned or co-sanctioned the Firemen’s Nationals off and on throughout the history of the event, first between 1986-91, then again from 2009-11 and, finally, from 2014-15.  National Midget Hall of Famer Billy Engelhart was the winner of the inaugural Firemen’s Nationals in 1982.

Logan Seavey (Sutter, Calif.) was victorious in the most recent Firemen’s Nationals held in 2019, sanctioned at the time by POWRi.  The 2018 USAC National Midget champ has made three starts in the event, finishing 2nd in 2018 and 6th in 2017.

Zach Daum (Pocahontas, Ill.) has won the Firemen’s National on two occasions, both in 2013 and 2017.  In USAC National Midget competition at Angell Park, Daum has taken 5th three times during the successive years of 2012-13-14.

Thomas Meseraull (San Jose, Calif.) won quite recently in Badger Midget competition on July 4 at Angell Park.  He was also a victor of Badger’s Open Wheel Showdown at the track in 2019.  In his lone USAC National Midget start Angell Park in 2012, Meseraull collected a 10th.

Tanner Thorson (Minden, Nev.) has been a frequent frontrunner at Angell Park, notching a Badger win on Memorial Day Weekend in May of 2014.  At the Firemen’s Nationals, he was 3rd and 2nd on consecutive nights in July 2014 and took 2nd again in the 2015 edition.  During the second place run in the 2015 Firemen’s Nationals, Thorson led 29 and three-quarters of the 30 lap distance before being nipped at the line by a matter of inches at the hands of his then teammate Rico Abreu.  More recently, Thorson was 3rd at the 2017 Firemen’s Nationals.

Kevin Thomas Jr. (Cullman, Ala.) was triumphant during a POWRi Midget feature at Angell Park in 2015.  He also owns the one-lap track record for USAC National Sprint Cars at the track, which he set back in 2015.  He was a top-10 finisher with the Sprints that night (10th).  His best performance in the Firemen’s Nationals came in 2015 with a 3rd place result and he was also 8th on night one in 2014.

Chris Windom (Canton, Ill.) has bagged numerous frontrunning performances at Angell Park dating back to his first appearance in 2007.  He took 5th with the USAC National Midgets there in 2012 and was 4th on both nights of the Firemen’s Nationals in 2014.  In USAC National Sprint Car competition, Windom has been a runner-up in 2012 and a 3rd place finisher in 2014.  This past June, he finished 7th at Angell Park with the winged IRA Sprint Cars.

Meanwhile, the 41-point separation from first to third-place entering the month of September in the current USAC NOS Energy Drink Midget National Championship standings between Buddy Kofoid (Penngrove, Calif.), Emerson Axsom (Franklin, Ind.) and reigning series champ Windom is the slimmest it’s been at this juncture of the season in a decade since 2011 when 24 separated Darren Hagen, Bryan Clauson and Kyle Larson.

It’s been six years since the series last made a visit to Angell Park, a thriller won by Rico Abreu on the final corner on the last lap.  The track has hosted 46 previous USAC National Midget events since Larry Rice’s victory in 1970 and can count many of the greatest individuals in the history of the sport among those who’ve won there, a list which includes 16 USAC National champions: Abreu, Rice, Bryan Clauson, Kevin Olson, Brad Kuhn, Christopher Bell, Bobby Olivero, Jeff Gordon, Jerry Coons Jr., Josh Wise, Levi Jones, Pancho Carter, Rich Vogler, Stevie Reeves, Tom Bigelow and Tracy Hines.

Sunday’s Firemen’s Nationals will have the pits opening at 1:30pm CT, stands open at 4pm, drivers meeting at 4:15 and hot laps at 5pm, followed immediately by qualifying and racing.

Sunday’s Firemen’s Nationals will be aired live on FloRacing at https://bit.ly/2ZpafUr.