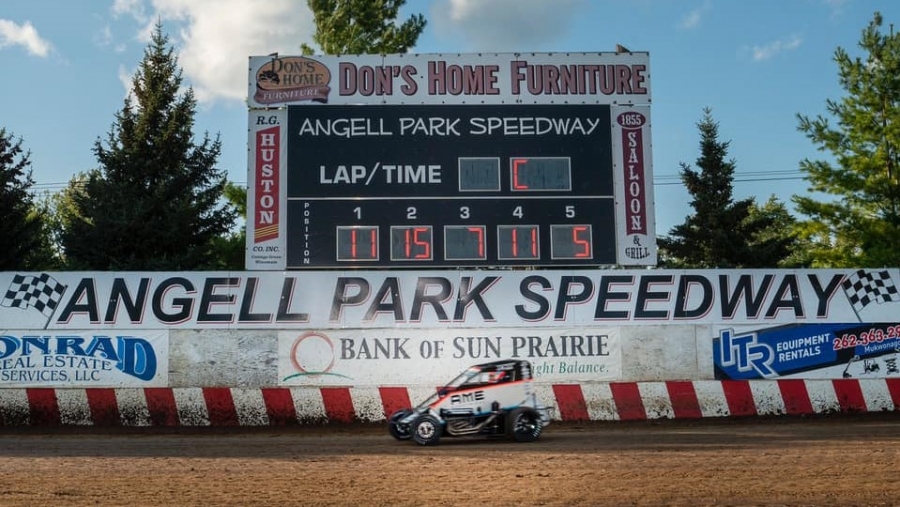 During the 2015 Firemen’s Nationals, Thorson led 29 and 3/4 of the 30 laps around the 1/3-mile dirt oval before Rico Abreu slid past on the final corner to steal the win from him by mere inches.

Mind you, Thorson (Minden, Nev.) has been a frequent frontrunner at Angell Park over the years, notching a Badger win on Memorial Day Weekend in 2014. At the Firemen’s Nationals, he’s been 3rd and 2nd on consecutive nights in 2014 and was 3rd at the 2017 Firemen’s Nationals.

However, a USAC NOS Energy Drink Midget National Championship feature win at Angell Park had alluded him, largely due to the series’ six-year absence from the venue.

Thorson’s sabbatical lasted until the lap 22 restart on Sunday night when he went third to first in rapid-fire succession, first past Justin Grant for second, then by Thomas Meseraull for the lead with eight laps remaining to score his series-leading seventh victory of the year and coupled with his three USAC AMSOIL National Sprint Car scores, became the first driver to reach the double-digit win mark with USAC this season.

The victory, worth $5,000, was the 27th of Thorson’s USAC National Midget career, tying him with none-other-than Tony Stewart and Gary Bettenhausen for 14th all-time.

All of it came following a little bit of a mechanical issue early on, which was rectified, then resolved after the changes in the track surface throughout the 30-lap duration played right into the hands of Thorson and his Reinbold-Underwood Motorsports/AME Electrical – MVT – Smith Titanium/Spike/Stanton SR-11x.

“We had some motor problems in that heat race,” Thorson revealed. “We helped it a little there and fixed a couple things and it wasn’t quite enough, but it seemed to help us tonight with how slick it got. I don’t really set up my car for the beginning of the race. I knew how good Thomas and Justin were at the start, but I felt like my car was going to come in there at the end.”

Thorson started third while an all RMS Racing front row of Meseraull and Grant jockeyed for position during the initial two laps before Meseraull spurted by on the outside to secure the race lead.

Meseraull remained in total control throughout the first two-thirds of the 30-lapper, upping his lead to nearly a full second just five laps in, then to 1.5 sec. at the halfway mark, as he began to put the tail end of the field a lap down in the running order.

Comfortably on top, Meseraull was forced to the bottom on lap 17 as the lapped car of Jack Routson, making his series debut, occupied the same line. Meseraull drifted back to the top after sliding by Routson and reaffirmed his preferred path without losing a single bit of his advantage as the train of Grant, Thorson and Kevin Thomas Jr. followed in suit on the cushion.

Just then, as Meseraull began to assert his foot on the collective throat of the field with nine laps remaining, 12th running Cannon McIntosh’s car went up a major plume of smoke down the front straightaway, forcing him to a stop and necessitating a yellow.

Without traffic being a contributing factor for the restart, the advantage went straight back to Thorson, third in the line, who had just begun to find his footing in a major way on the bottom line and was in the process of getting into second past Grant when the yellow flag fell.

“I felt like Thomas, Justin and I were all kind of the same speed,” Thorson explained. “I got right on Justin’s bumper for most of the race and just couldn’t really get to him or get to a spot where I could get by him. A couple of those lapped cars we were passing, they were keeping up with us a little bit more on the bottom. But I knew on that restart, I had to go for it.”

And he did, as he resumed his flirtation with the low line and nosed underneath Grant for second in turn two on the lap 22 restart, briefly making it three-wide with he, Grant alongside in the middle, and Meseraull up top, tossing dirt at the National Midget Hall of Fame building as he blitzed past.

Thorson completed his pass of Grant with a slide into turn three, which put him right in lockstep with Meseraull. By the time the two got to turn one and two, it was game over as Thorson forged ahead, clearing Meseraull at the exit of turn two, then proceeded to run away ala Del Shannon, closing out with a 2.555 second margin of victory over Meseraull, Grant, Chris Windom and Logan Seavey.

Thomas Meseraull (San Jose, Calif.) led a race-high 22 laps and earned his best result with the series since a similar runner-up finish exactly one month earlier at New Jersey’s Bridgeport Motorsports Park on Aug. 5. On Sunday, Meseraull, a Badger Midget winner at Angell Park on July 4 of this year, followed up his second-place USAC run with another Badger win immediately after.

“This thing is always so good,” Meseraull said of his RMS Racing/EnviroFab – Response Management Services – Engler Machine/Spike/Speedway Toyota. “We kind of killed our tires there and, maybe if I had moved to the bottom, I could’ve held him off, but this thing was so good up top, just letting her eat. I love this place. This is hands down my favorite midget track in the country. I don’t know why. We don’t race here a lot, but when we do get to race here, I love it.”

Justin Grant’s only previous Angell Park experience prior to Sunday night came in a sixth place performance during a 2015 USAC AMSOIL Sprint Car National feature event. Grant (Ione, Calif.) put the second RMS Racing car on the podium on this night in what was first ever midget appearance at the famed track aboard his RMS Racing/NOS Energy Drink – EnviroFab – Response Mgmt. Services/Spike/Speedway Toyota.

“I had a good car, but we just weren’t quite as good as Tanner and Thomas,” Grant admitted. “Those guys were really good. They were dialed in. We were close, but just not quite good enough. I struggled to get hooked around the bottom. We were pretty good, but we just felt like we were a third-place car and that’s where we ended up.”